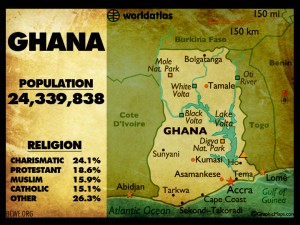 Each week our church features a Country of the Week to pray for. We ask the Lord for laborers for the harvest in this specific country. One of the young teenage ladies in our church has begun to help us by using her writing skills to help us give you a better understanding of each featured country. Thank you Rachel Harrell, awesome teen SENDER, for using your talents to motivate others for world missions!

In 1806, a war was raged between two forces in what we now call Ghana. It was the Ashanti-Fante War. Fought between the British powers and the indigenous Ashanti people, the British won, but it was a start towards the eventual independence of the now Republic of Ghana.

There was a struggle in Ghana for independence long before World War Two, after which there was an increased move for independence. In 1947, a new political group called United Gold Coast Convention called for immediate independence. In 1948, the current member of UGCC and future prime minister and president Kwame Nkrumah was arrested. He later formed his own party, whose motto was “self-government now”. After gaining the support of the people, being imprisoned once again, appointed leader of government business, and after further negotiations with the British, Nkrumah was able to finally announce the independence of Ghana on March 6, 1957. It was the first sub-Saharan African country to gain independence.

Kwame Nkrumah was instrumental in the beginning of the Organisation of African Unity, which spawned the African Union in 2002. However, in 1966, the government Nkrumah had tried so hard to build was overthrown by a military coup. After many of these coups, Flight Lieutenant Jerry Rawlings rose to power in 1981.

In 2009, John Atta Mills was elected president of Ghana. It was only the second time power had been transferred legitimately from one person to another. Ghana was officially a stable democracy. He was reelected in 2011 with 96.9 percent of the total votes cast.

In the Republic of Ghana, there are 24,233,431 people in 10 regions. There are over a hundred ethnic groups. The official language is English, although the average Ghanaian speaks a local language as well. There are 79 languages listed for Ghana, nine of which are government-sponsored languages.

Ghana has a literacy rate of around 65 percent. They have a six year primary school program, and a three year middle school program. After the last year of middle school, Ghanaians must complete a Basic Education Certificate Examination. Ghanaians who go on must go through senior high school and complete an admission exam before entering any college or technical schools. At 83%, Ghana has one of the highest school enrollment rates in West Africa.