Our church has been so blessed to have a great assistant pastor in Trent Cornwell.  His hard work and dedication have helped to make our church strong.  And his love and zeal for World Evangelism has helped motivate and move many people to get more involved.  The following is something Pastor Trent wrote on his blog about the importance of the entire church getting involved in the great responsibility of World Evangelism:

One day there were many people working in a house making clothes with their sewing machines. They were doing a very good job but then all of a sudden they got to a point where they could not do there job anymore. The sewing machine broke!! (sound effect: dunt.. dunt.. dun..) No one could figure out what they should do. They used all of their resources but could not figure out a solution to their new problem. They had such grand dreams of providing clothes to everyone in the community.

Someone remembered that there was a sewing machine on the other side of the river. As people began to take needle and thread and work while their system was down. They decided that someone should stop the work and cross the river to gather needed resources and people to finish the job. Even though they had many, many people in the village now helping them they were in need of somethings that would accelerate the work. As they discussed who should put down their needle and thread and cross the river they look out and saw this man coming their way across the river. He begins to scream, “I heard you had a need and I am here to help!”. 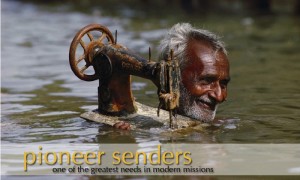 The man takes a sewing machine that had been abandoned for years and takes it to a place where it meets a huge need. He sets the sewing machine down, heads back across the river spending every amount of energy and dollar he can to find and relocate resources to see a job done on the other side of the river. Along the way he finds a joy that is seen in the smile in the picture.

Okay, maybe that wasn’t Pilgrim Progress material but it would make a good story for my son to learn about missions.

I firmly believe one of the greatest, if not the greatest needs, in modern missions is for pioneering senders. Let me make sure you know what I mean by this word combination. Pioneer as a verb: Develop or be the first to use or apply (a new method, area of knowledge, or activity). As a noun: A person who is among the first to explore or settle a new country or area. Sender (as used in modern missions terminology) one who gives his or her life to mobilize resources and people for the cause of world missions. We need PIONEER SENDERS!

Senders make it their mission in life to spread God’s mission. They use all the resources they possess to spread the Word and reach people in need of God. We need senders who are willing to roll up their sleeve, alter their schedules, forsake their hobbies and pioneer in this modern era of missions. As Seth Barnes of A.I.M. puts it “we need people to live radical lives in a comfortable world!”.

We know the stories of the Jim Elliots, William Careys, and Aarons in northern Africa. I praise God for them and would never want you I was down playing their importance. It is their radical steps of faith and pioneering spirit that now calls upon us senders to meet their radical obedience with the same radical obedience to God’s mission in this world.

In the same manner many have consecrated their lives to the cause of the great commissions as goers/missionaries I do the same as a sender! We need to have a holy discontent for the current spiritual condition of the world. We need to act radically and pioneer as senders.

Here are some areas that I see need pioneering by senders:

Look around: do you have any “old type writers” that need to be carried across the river? Do you have the ability to solve an issue that a missionary is facing? It is time for us senders to step up and live pioneering lives!

You can check out more from Pastor Trent at Trentcornwell.com