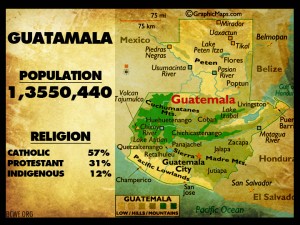 The Republic of Guatemala has an estimated population of 13,276,517 (2009 estimate). The official language there is Spanish. Guatemala’s capital is Guatemala City. Their current president is Álvaro Colom Caballero and the vice president is Rafael Espada.

Guatemala is a part of Central America. It is bordered by Mexico, the Pacific Ocean, Belize, the Caribbean, Honduras, and El Salvador. It has a land mass of 42,042 square miles.

Guatemala has a low-life expectancy rate of 18.9 years for males and 20 years for females. It is the lowest life expectancy rate in the Western Hemisphere. It is attributed to disease, underdevelopment, and little formal education, as well as the drug trafficking in the urban areas of Guatemala.

Around 50-60% of Guatemalan’s claim to be Catholic. Another 40% is Protestant, which has grown increasingly recently. A smaller 3% are Eastern Orthodoxy and 1% are of the indigenous Mayan faith.

Guatemala was once part of the Audiencia and the Captaincy General of Spain. It was also part of New Spain, now called Mexico. The first capital was in Tecpan Guatemala, founded in July 25, 1524. At that time, it was called Villa de Santiago de Guatemala and was located near Iximoché. After the indigenous Kaqchikel attacked the capital, their next capital was in Ciudad Vieja, founded on November 22, 1537. A series of natural disasters forced the Guatemalans to next move to Antigua. After Antigua was destroyed by earthquakes during 1773 and 1774, the Guatemalans moved to their current capital, Guatemala City on January 22, 1776.

The Captaincy-General was made up of the countries of Guatemala, Chiapas, El Salvador, Nicaragua, Costa Rica, and Honduras. They announced their independence from Spain and integration into the Mexican Empire on September 15, 1821. Unfortunately, the Mexican Empire crumbled two years later.

The United Provinces of Central America was formed by Guatemalan provinces. A Guatemalan named Rafael Carrera was a leader of the uprising against this Union. During the civil war leading up to and the eventual dissolution of the Union, a portion of the Guatemalan Highlands, Los Altos, declared it’s independence. Despite this, Rafael Carrera seized the territory back into Guatemalan borders.

In 1871, the “Liberal Revolution” was started under the leadership of Justo Rufino Barrios. He did a great work in Guatemala to improve trade and manufacturing of new crops, as well as modernize the country. During this time, coffee became a major crop for Guatemala.

Justo Rufino Barrios had great dreams for bringing Central America together again, and died fighting for it. On a battlefield in El Salvador, Barrios died in 1885.

Dictator Manuel Estrada Cabrera took over Guatemala from 1898 to 1920. His access to the presidency was considerably aided by the United Fruit company, which, during his presidency, gain much power in Guatemala.

After much protestation Guatemala’s then-leader and dictator, Jorge Ubico Casteñeda resigned from office. The next leader, General Juan Federico Ponce Vaides was forced from office by coup d’état on October 20, 1944. A military junta was installed led by the same men who led the coup d’état, Major Francisco Javier Arana and Captain Jacobo Arbenz Guzmán plus another man, Jorge Toriella Garrido.

The country’s first free election was won by a man who had been in exile in Argentina for fourteen years. His name was Juan José Arévalo Bermejo. He was a writer and teacher formerly. He was also the first of Guatemala’s democratically elected leaders to finish his term.

From 1950 to the 1990’s, the Cold War period, the United States supplied Guatemala’s army with weapons, supplies, and money.

The next leader, Jacobo Arbenz Guzmán, was ousted by the CIA in the Guatemalan 1954 coup d’état. It was feared that his socialistic government would become a Soviet foothold in the West.

Colonol Carlos Castillo Armas was the next leader. He served in office until he was assassinated in 1957. Next to lead Guatemala was General Miguel Ydígoras Fuentes. He was responsible for the building of airstrips in Petén for the Bay of Pigs Invasion in 1961. He also authorized the training of 5,000 anti-Castro Cubans in Guatemala. In 1963, Ydígoras was forced from office by a coup by his Prime Minister Colonel Enrique Peralta Azurdia.

After many more leaders, a civil war, and close to 200,000 civilian deaths, Guatemala signed the peace accords with the guerrillas they were fighting. Since then, Guatemala has regained some sense of peace, and has had several democratic elections. Their current president, Álvaro Colom Caballero, is part of the National Unity of Hope.

1 thought on “Country of the Week–Guatemala”