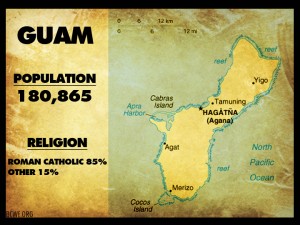 Each week our church features a Country of the Week to pray for. We ask the Lord for laborers for the harvest in this specific country. One of the young teenage ladies in our church has begun to help us by using her writing skills to help us give you a better understanding of each featured country. Thank you Rachel Harrell, awesome teen SENDER, for using your talents to motivate others for world missions!

Guam is an unincorporated territory of the United States. It is one of five American territories with a civilian government. Their motto is “Where America’s day begins”. Guam is the largest of the Mariana Islands. It is also the southernmost of the islands.

The capital of Guam is Hagatna, also known as Agna, which is the second smallest village in size and population. In the 18th to the 20th centuries, it was the center of Guam’s population.

Since Guam is a United States territory, the president is Barack Obama. The Governor is Eddie Calvo, and the Lieutenant is Ray Tenorio.

In 1898, America took possession of Guam as a part of the Treaty of Paris, after the Spanish-American War. The other Mariana Islands went first to Germany, and then Japan. Guam was to serve as a station for traveling American military ships.

On December 8, 1941, Guam was attacked and invaded by the Japanese. While our Navy had moved away, the local Chamorro were not warned of the possible invasion. During the approximately thirty-one months Japan occupied Guam, it is estimated that nearly 1,000 Guamanians died. The locals were treated as an occupied enemy. They were made to endure forced labor, family separation, execution, and concentration camps. Some historians believe an estimated 10 percent of Guam’s then 20,000 population was killed by war violence.

On July 21, 1944, the United States captured the island of Guam from the Japanese in the War of Guam. More than 18,000 Japanese were killed, while the last 485 finally surrendered. Yet, Sergeant Shoichi Yokoi, who was the last Japanese holdout in Guam, did not surrender until January of 1972.

Guam is the only U. S. soil with a large population to have been occupied by foreign military power since the War of 1812.

The Guam Organic Act of 1950 made Guam an unincorporated, organized territory of America. This allows the island to have it’s own established government and still gives the Guamanians U.S. citizenship. However, they are not able to vote, and their representative is a non-voting member.

In the indigenous Chamorro language, Guam is referred to as Guahan. On February 15, 2010, Former Governor Felix Camacho called for the island to hitherto be referred to by its name in the indigenous language. He then issued an executive order to make the new name official, and began calling himself the “Governor of Guahan”. Guahan had been used widely throughout 1521 through 1898; but in 1900, Richard Leary, who was the first Naval Governor of the island, adopted the name when he called it the “isle of Guam”.

Two traditions of the indigenous Chamorro are chenchule` and inafa`maolek. Chenchule` is essentially the practice of reciprocity in Guam. In their culture, chenchule` is the belief that everything–land, produce, etc.–belongs to everyone. Inafa`maolek is their word for interdependence. Chamorro culture revolves around this. There is a great lean towards mutuality rather than individuality.

In 1668, the first colony on Guam was established. Among those first Spaniards was Padre San Vitores. He was a Catholic missionary. To this day, eighty-five percent of Guamanians still claim Roman Catholicism as their religion.